skip to main | skip to sidebar

REVIEW: Plato and a Platypus Walk into a Bar... 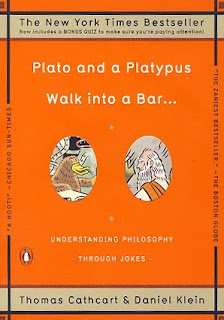 
I joke, therefore I am


If you like telling witty jokes, and like being so smart about it, then this is the right book for you.

Being the perfect epitome of Derrida's deconstructive, dualist idea of nature, Plato and a Platypus Walk into a Bar can be taken as a representation of the lighter side of philosophy, or -- on the flipside of the coin -- a creditable, logical analysis on the anatomy of jokes and how jokes work.

The book's title is a tongue-in-cheek reference to the age-old "bar joke" that tells you exactly what to expect inside: a half-drunk, half-sober philosophical rambling of the many virtues of humor that are both too absurd yet too real.

In filling in the wealth of the 210-page tome, authors Thomas Cathcart and Daniel Klein went to great lengths pointing out the relationship between humor and philosophy's major subdivisions such as metaphysics, logic, ethics, existentialism, and the philosophy of religion.

Introducing readers to this maniacal world of philosophy jokes are Dimitri and Tasso, two fictional Athenians whose "dialogs" become catalysts for subsequent discussions found in the book, not to mention plenty of eyebrow raises that come with them -- the dialogs, not the Athenians.

Dimitri is the dimmer of the two and serves as major comic relief as he takes the liberty of paraphrasing some of philosophy's most perplexing questions, including this existentialist classic: "If Zeus doesn't exist, is Poseidon still his brother?" At which point Tasso starts to wonder if his fellow Athenian was an enlightened Buddhist of a few bricks short of an amphitheater...

Cathcart and Klein also took the trouble to imply that just like many other good jokes out there, philosophical humor is at its funniest when politically incorrect. It makes little surprise that Jewish jokes provide a large hunting ground for these authors, particularly those touching on the issues of identity, existentialism, ethics, logic and religion.

Consider one particular Jewish mother whom, upon being inquired about the ages of her two sons by a friend, replied metaphysically, "The doctor is five and the lawyer is seven."

For those who ever doubted whether the universe had a purpose, they had better ask Mrs Goldstein.

Or what about the young rabbi who was so crazy about golf that he sneaked off to play a quick game during Yom Kippur? God's decision to give the rabbi a hole-in-one on that very day was questioned by an angel who didn't think the punishment was "ethical" enough. "*Of course it is,' said the Lord, smiling. "Who can he tell?'"

Don't get too attached to the Jewish jokes, though, for Plato and a Platypus has a very interesting chapter devoted to the philosophy of language that seems to fit no culture better than our own.

After all, Indonesians are always the most adept in inventing new puns and word plays (plesetan), aren't we? Ever heard of the joke about the strongest person in Indonesia? That's Nyonya Meneer, who has been "standing up since 1919" (berdiri sejak 1919). Not to mention those puns on advertisement slogans.

Our brand of linguistic jokes certainly has no problem fitting into Cathcart and Klein's definition of humor in the philosophy of language. One thing to bear in mind though, some jokes may seem funny to you but not to others. After all, relativity -- just like ethics, metaphysics and epistemology --- is a part of philosophy, too.

Plato and a Platypus can be taken as yet another attempt from philosophy elites to step down their ivory tower in bringing the seemingly abstract topic closer to the common reader. The book is laden with both on- and off-color jokes and witty remarks to spice up your next dinner party, and helps cast a light on the ever-mysterious philosophical notion known as the ding an sich (look it up under "Epistemology").

The best part of the book is undoubtedly its last chapter, which deals with the subject of metaphilosophy or "the philosophy of philosophy", which ultimately comes to the telling of meta-jokes or "the jokes about jokes".

While it is wise not to spoil these jokes for future readers, it is perhaps safe to mention that one of the much-anticipated meta-jokes involves a blind man, a lesbian and a frog walking into a bar, and a barkeep who wondered whether it was all a joke.

Mrs. Brevoort, a widow, was hanging out by the pool at her country club when she spotted a handsome man sunning himself.
She sidled up to him and said,"Well, I don't believe I've seen you here before."
"Not likely," the man said. "I've been in the penitentiary for thirty years."
"Really? What for?"
"I murdered my wife."
"Ah!" Mrs. Brevoort said, "So you're single!"

s
Posted by Andrea Tezumo at 12:03 PM No comments:

Preview buku I am a writer kini hadir di Scribd

Ingin menilik ke dalam buku I am a writer?

Keep writing! ^^
Posted by Andrea Tezumo at 7:10 PM No comments:

Telah terbit: I am a writer oleh Andrea Tejokusumo 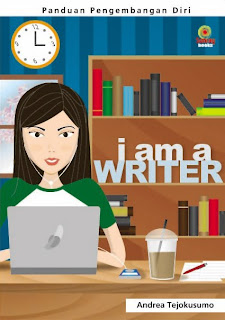 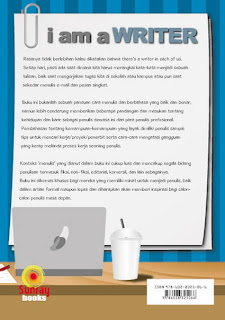